So this week over at Fab'n'Funky we are looking for 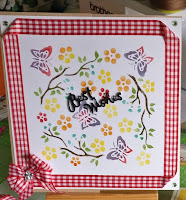 I had great fun using stencils for this creation. (Stencil I forgot I had 🙈)

So I started with the lightest colours 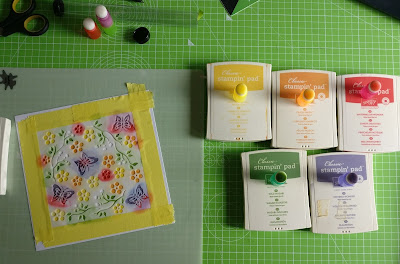 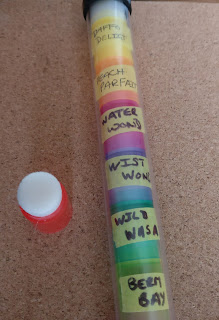 I bought these a little while ago and I am really enjoying using them, "finger ink blending brushes", I find they are much smoother than the foam finger blenders and they don't breakup like foam does.

And of course I label them after use, who wants to cross-contaminate their blenders 😉 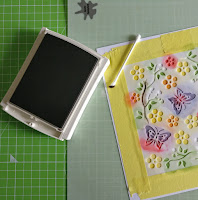 Sometimes the simplest solutions are the best.
The finishing ribbon was simply put on using double-sided tape. 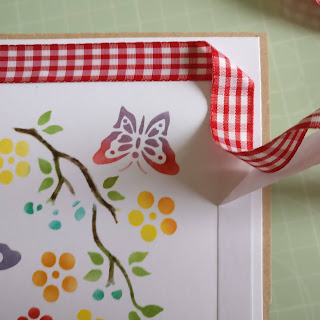 Just slowly worked my way round the corners, folding them at 90degrees to produce a neat 45 degree angle. 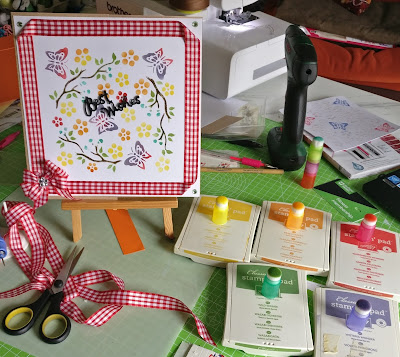 Please leave the lovely design team some love and go have some fun.
Hugs & Happy thoughts
Buffy xx
Posted by Buffy at 08:00:00 No comments:

Hello my lovelies, I hope you have had a GREAT week and you are ready for some more sharing.

So here is Fab'n'Funky's challenge offering

Our challenge this week is

optional-change it up
this weeks theme is all about new, so babies, homes, jobs, etc.
(Optional extra - try one colour scheme but for both 1 male & 1 female version.)
I decided to colour-in my chosen stamp with the same colours, I then based all the backing papers and accessories on those colours. 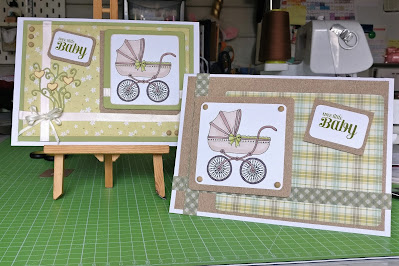 So the Prams are coloured in using ProMarker colours March Hare, Tawny Owl & Olive green, with slate on the tyres. The backing papers were from the same collection (can't remember the name 😔) with a muted colour palette.
I also used a woodgrain textured paper, minimising its use on the feminine version.
Stamps - WMS sentiments & FtLoS New arrival
Ink (sentiments) - SU Olive green
Corner punch
Wooden gems
All our lovely DT always appreciate a visit - HERE
Hugs & Happy thoughts
Buffy xx
Posted by Buffy at 08:00:00 No comments:

For my youngest daughters birthday I decided to make her a new Dice Bag.....yes a dice bag!

She's into DnD and has a few different dice sets. But let me share the story of how the bag came to be.

It starts with an idea - you have no idea if you can pull it off or how to start or if it will work, BUT you carry on and have a go and that's what really counts, having a go. First comes a tatty looking sketch of what you want to make. 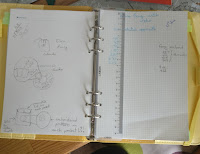 This is how everything I have ever shared with you always starts, and yes sometimes even I can't make sense of my scratty little sketches 😂
My pattern making is quite hit or miss, and a project can change several times as it goes.
I also don't own all the fancy dressmaking tools some people may have, so normal household object get drafted in as sewing tools - in this case it a an old record we inherited that was badly scratched and unplayable (yes, we still own a record-player). 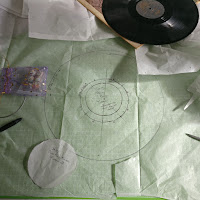 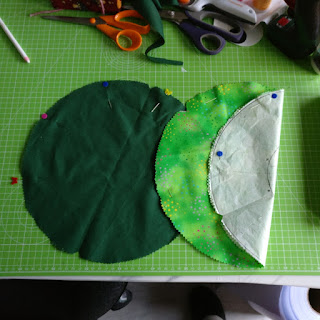 So we have an inner/outer main base plus the bottom support. Maths time, divide 360 by 7?!? no by 8 to give pocket positions. I hope I'm not underestimating how many sets of dice she has.....especially as there are two sets sitting here on my desk (they were on her wish-list from an Etsy company called Luffleberry)
Pockets - I originally considered just flat ones but as I looked at the dice sets I realised depth was a must. The angles meant figuring out a shape that would hold the sets comfortably (easily get the dice in and out when required). BUT, I want each pocket to have embroidery on it, so I had to trace the pattern that I came up with onto the fabric so I could position it in my embroidery hoop. 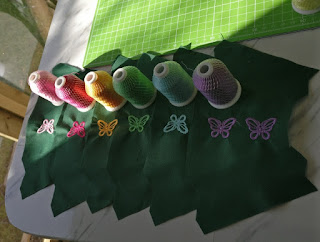 The other two pockets were still being embroidered at this point.
A little press with the iron before top-stitching and attached to the base 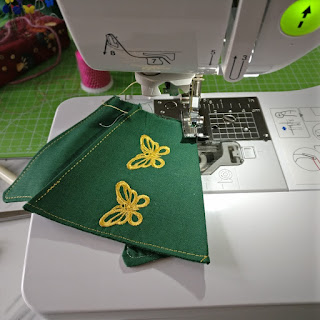 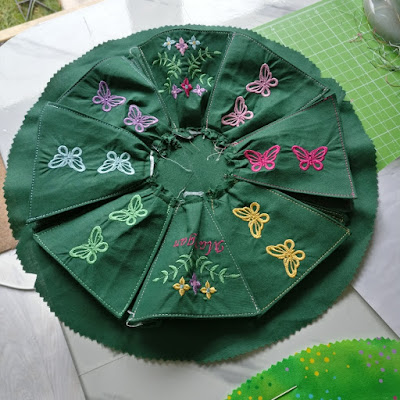 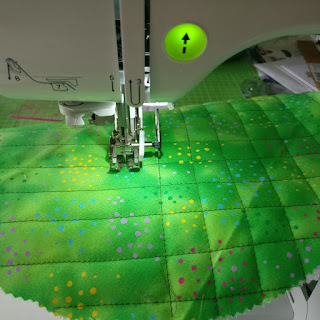 As I was sew I kept looking over at the inner section, it occurred to me that it looked a bit like a lily-pad, so there was only one thing for it. 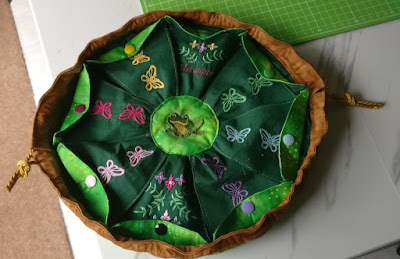 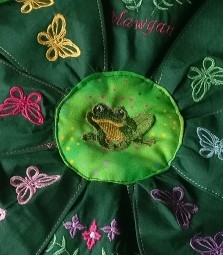 It needed a little frog, it was probably also in my mind because my daughter keeps putting the most adorable YouTube clip up on the telly- it's called "Coqui song" (if you get the chance click the link  and go take a peek, it's so cute)
So it was then just sewing the inner and outer together, and adding the drawstring. 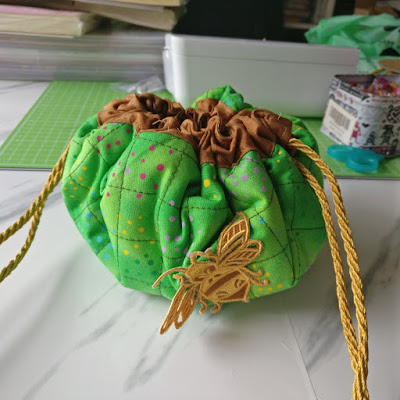 Of course I couldn't resist adding a little embroidered bee to the outside.
Well, that's it for the moment. I have to go make the hubby's birthday present now. But I'll be back soon with more sharing and some news on new Scan'n'Cut videos I've been planning to make.
Hugs & Happy Thoughts
Buffy xx
(Wild_Nanna)  😉
Posted by Buffy at 09:00:00 2 comments:

So over at Fab'n'Funky challenges we have a lovely cheery theme

Show us your flower power

And I have two offerings to share with you.

Firstly a subtle green stepper, I have to confess it's a little bit of cheating as it is a TL die I bought a few years ago at Doncaster Crafting Live. The flowers are another TL die from my 2019 advent calendar. 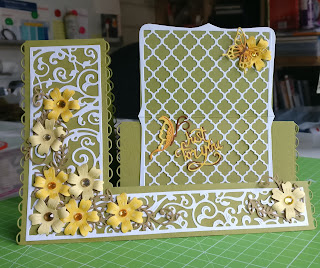 This bright & bold card consists of some fabulous patterned paper I have had for over 5 yrs. 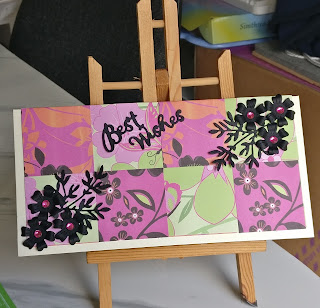 Pastel strips in one direction with bold strips woven the other way. I couldn't resist adding black flowers (TL die). This card was created with one of my friends in mind. I  know she'll like the bold colours. Not sure how she's going to feel about the 3 sheet of A4 that are the letter I included 🤣.
Please visit all our lovely DT's over at Fab'n'Funky challenges and leave them some love.
Back very soon with some crazy creations.
Hugs & Happy Thoughts
Buffy xx
Posted by Buffy at 09:00:00 No comments:

Buffy
Derby, Derbyshire, United Kingdom
Married to my best friend Graham. We have three nutty kids Anne, Anthony and Mawgan. Turning my crafting passion into my business passion Check out my boutique - Ow.ly/mKh550AthYa

I am currently writing up my recipe for these lovely little treats. These are my Salted Caramel Crispies and I am very pleased to say th... 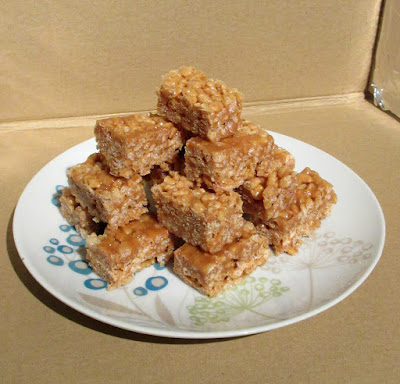